Black Radical Thought on Environmentalism and Race with Carolyn Finney

This was such an eye-opening talk about the unexpected but obvious (when you see it) link between folks of color and environmentalism. We attended Black Radical Thought in the Contemporary South, a lecture series hosted by Nikky Finney. Dr. Carolyn Finney who wrote Black Faces, White Spaces broke it down like this. The industry of environmentalism is blind to and doesn’t have words for the plethora of connections between people of color and the land. 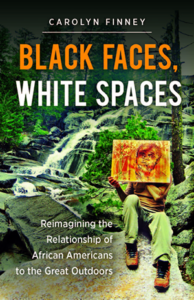 A word like environmentalist seems so separate from who people of color are, when it is actually who we have always been. We have always cared for the land, found creative ways to nurture it, and innovated ingenious solutions to modern problems using the land—most of which are vastly ignored. Carolyn’s book spotlights many African Americans who are saving both our planet and our communities.

The short highlight video below contains a link to an excerpt of Carolyn’s lecture. In that excerpt, she showcases Brenda Palms Barber’s Sweet Beginnings, which invites previously incarcerated African American men and women to make urban honey on the Westside of Chicago; Pearl Fryar who built a garden of topiary sculptures from scrap plants, in Bishopville, S.C.; and Tyree Guyton’s The Heidelberg Project, which transformed discarded buildings on Detroit’s East Side into art. All of these people of color are reimagining possibilities for recycling, sustainability, and community involvement. Now, the question is, how can we as individuals and as a collective respond?

Black Radical Thought in the Contemporary South is hosted by Nikky Finney and USC’s English Dept. and the African American Studies Dept.