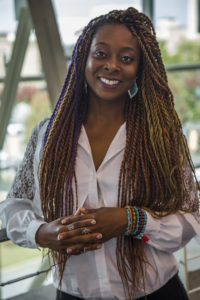 Candace​ G. Wiley​ was born in S.C., graduated with her B.A. from Bowie State University, an H.B.C.U. in M.D., her M.A. from Clemson University, and her M.F.A. at the University of South Carolina as a James Dickey Fellow. She is co-founding director of The Watering Hole, a nonprofit that creates Harlem Renaissance-style spaces in the contemporary South, and she often writes in the mode of Afrofuturism, covering topics from black aliens, to mutants, to mermaids. She is a Vermont Studio Center Fellow, Lighthouse Works Center Fellow, Fine Arts Work Center Fellow, Callaloo Fellow and former Fulbright Fellow to San Basilio de Palenque, Colombia, a town that was founded by West Africans who had escaped from Cartagena slavery. (The people have their own language and customs that trace back to the Bantu and Kikongo in West Africa.) She is currently complete the Tulsa Artist Fellowship and is now living, writing, and running The Watering Hole from Tulsa, O.K.

“Parcel Map for the County Assessor” and “The Cut Up.” Black Girl Magic Anthology. Forthcoming.

“Answers for the Hard Questions” and “How to Lift Him.” Texas Review. Fall 2017.

“White Girl,” “Grandmother Clock,” “Single Mother’s Song.” Home is Where: an anthology of African American poets from the Carolinas. Oct. 2011.

Woods, Ann. “Candace Wiley brings People of Color Back to the Future.” The Provincetown Banner. February 2018.

“In the Spotlight.” Association of Writers and Writing Programs. January 2018.

Bates, Margaret. “Sitting Down with the Women of The Watering Hole.” Legendary Women. Oct. 2015.